Chilapata forest is one of the most precious treasures of Dooars. Nestled in the heart of the picturesque Eastern Dooars at the foothills of the Eastern Himalaya and perched between Buxa Tiger Reserve and Jaldapara Wildlife Sanctuary, lies Chilapata Wildlife Sanctuary, the most important migration corridor of One Horned Rhinos and Asiatic Elephants. The dense natural forest is home to leopards, bison, Chital deer, Sambar deer, hog deer, barking deer, 22 species of snakes, 180 species of birds, and a large diversified variety of butterflies. On 16th of January 2020, a black panther was reportedly spotted crossing its way from one part of the forest to another. 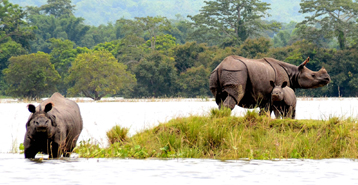 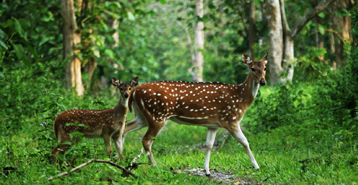 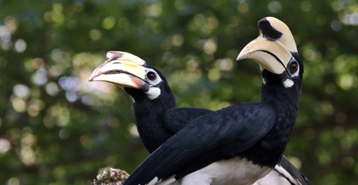 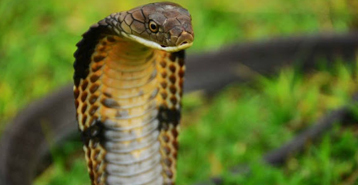 The jungle safari further lets you witness the historical ruins of a fort, built during the Gupta Era in the fifth century. The ruins consist of a broken wall and a broken gate of the Nalrajar Garh (fort of the King Nala), where it is believed , the soldiers of the Maharajahs of Coochbehar used to protect the kingdom from Bhutanese invasion. While exploring this forest, you will encounter the 'Ram Guna Tree' or 'Ramgua Tree' the tree which bleeds. These trees have a unique blood-like red fluid that come out of their bark when cut. There is a story or myth to this, that some loyal guards of the fort were transformed into trees while the fort was getting destroyed and till date they are still guarding the remains of the fort. 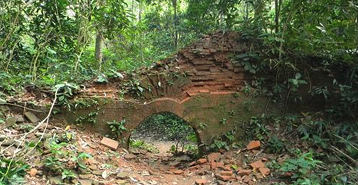 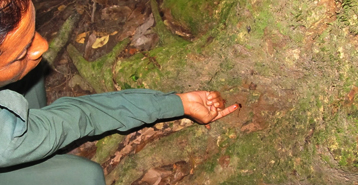 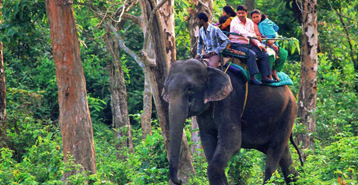 Another beautiful point inside Chilapata forest is the Mendabari Watchtower. Located in the vicinity of the river bank of Kunai, Mendabari Watchtower offers a panoramic view of river Kunai flowing through the semi-tropical forest of Chilapata along with few sighting of large herbivores like gaur and elephant who can be seen drinking water from the river stream. 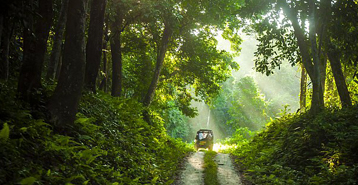 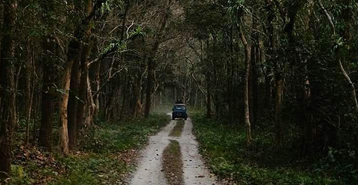 The Chilapata jungle safari lasts for 1 hour 30 minutes. There are 4 available time slots for this. You can choose any one according to your convenience. Chilapata forest opening times for safari is given below : 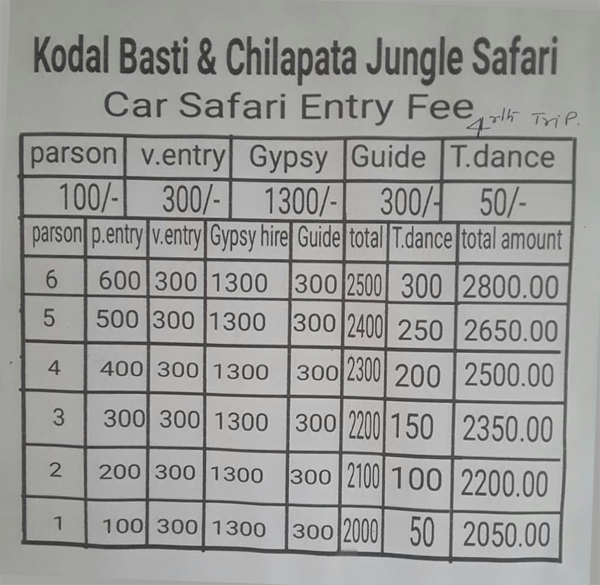 T.dance is Tribal dance, p.entry is person entry, v.entry is vehicle entry. If you're going for the first/second/third trip, there is no Tribal dance cost. Only the fourth trip has tribal dance performance. Hiring gypsys and guides, trained by Forest department, is mandatory. A maximum of 06 persons can be accommodated in a gypsy. One can either book the entire gypsy by paying the cost of 06 persons or can share it with others.

Note : Photo identity proof with one copy xerox of every person going for jungle safari is mandatory.